Oracle’s Are You The Smartest Contest 2011

Are You The Smartest is an Oracle constest for BeNeLux Oracle partners and is held for the 8th year now. This year the participants of the AYTS contest could follow one (or more) of the following 6 technical tracks:

Each technical track consisted of 4 technical session which could be followed at an location at Oracle or online using WebEx. To be allowed to join the contest in the first place, an specific assessment at OPN should be successfully completed for each track. Every month there was a session (2,5 – 3 hours) for each track and in April each track could be completed with an online exam.

I initially started with the Security track, mainly because Oracle’s offers a lot of new products and techniques, for which there is so much information and it is nice to have some sort of a compilation of this information. Because there are always things to learn I also decided to follow the database track too, just to see if they had something new to offer me.

On thursday 19 May 2011 the awards for the Are You The Smartest Contest where held at Oracle’s headquarters in Utrecht The Netherlands. After some speeches about this years contest, the 3th (250,00 travelers cheque) and 2th (500,00 travelers cheque) place winners  for each participating partner were announced. Then it was time to announce the first place winners. The price: an all-inclusive 5-day trip to the US (San Fransisco and Las Vegas)!

Fortunately I was one of the winners and so I’m heading for the US on the 16th of June! A photo of the Dutch winners of the US trip (I’m the one in the middle on the front row). 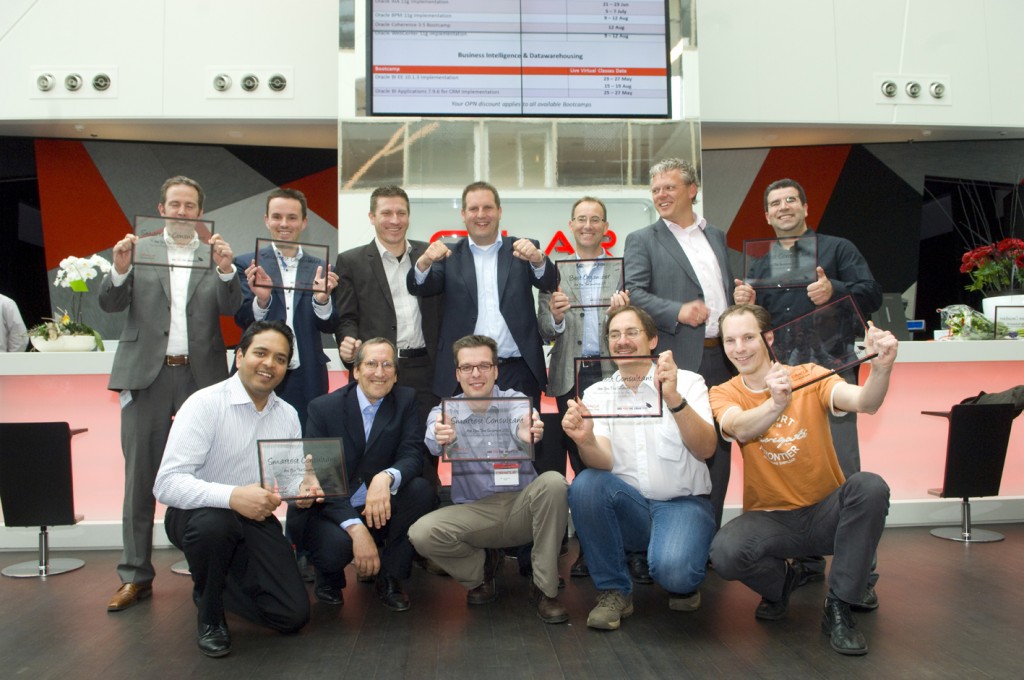 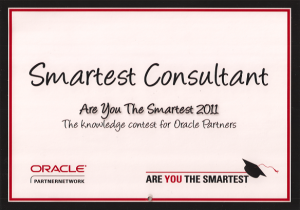 All winners of the contest got the award like the one shown at the left.

20 May 2011:
Had to get a passport as soon as possible, because I only had an identity card (only valid in Europe). I had an passport until January this year and got an identity card while I wasn’t planning on going to the US 🙂

26 May 2011:
Finally got my passport, now just filling out an ESTA form…. Got the trip planning from Yves van Looy.

27 May 2011:
Filled out the ESTA form (you used to have to fill out a green-card in the plane to the US) to be able to go to the US and got authorized.

2 June 2011:
Checking out if at least one of my suites still fits me…. have to take one with me, at least for our visit to Oracle’s headquarters.

16 June 2011:
Arrived on Schiphol at 06:45 met all the 25 winners going to the US from the Netherlands and Belgium. Flight took off nicely on time (around 09:50) and after some 10 hours we arrived in San Francisco (around 11:15 SF time). A long flight, but the food was nice and we all had our own entertainment system with lots of movies to choose from.

A limo-bus took us to the Sheraton hotel on Fisherman’s wharf. Then it was time to take take a ride over the Golden Gate bridge…. by bike! Took us around 2 – 3 hours cycling from San Fransisco to Sausolito where we had some nice sea-food and champagne. Luckily we took the ferry back to San Francisco. Just some time to go back to the hotel freshen up a little and then off to the Hardrock cafe on the pier where we had our dinner…. 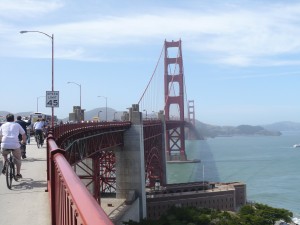 Then finally after being awake for some 33 hours went to bed… Yes going to sleep! Uhhh guess not, slept around 00:00 and woke up at 03:00 being completely awake. Jetlag!

17 June 2011:
At 07:45 an executive limo-bus took us to Oracle Headquarters on redwood shores, where we had a nice breakfast in the visiting center. We then had two interesting presentations, one by Wim Coekaerts (Senior Vice President for Linux and virtualization engineering) and one by SOA expert Jeff Davies. After that had a quick lunch at Oracle and then got a tour around the Oracle campus. I have to admit, it gave some sort of a shiver to walk around all the well known round and shining Oracle buildings. 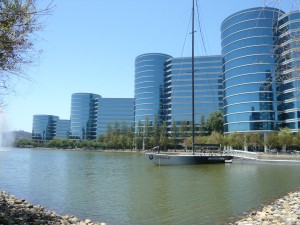 After comming back to San Francisco we took off to Alcatraz. Not much (at least not that I’ve seen) changed since the last time I was there (10 years ago), but I still was nice to walk around there again. 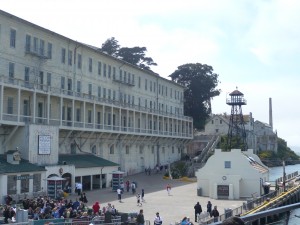 In the evening we went to a nice restaurant called McCormick & Kuleto’s Seafood which has a great view over SF bay. Walking back to the hotel we came around and Irish Pub so……. what a terrible beer they have there (I had a Hoegaarden but totally without an brew head and with a lemon in it…. yughhh 🙁 ).

18 June 2011:
The day to head over to Sin City (Las Vegas). We had some time before going to SF airport so they arranged a sight-seeing trip by taxi-bus through the different areas of San Francisco (China Town, Union Square, Castro, Twin Peaks and others) and having a clear wide-view over San Francisco from Twin Peaks.

After a 2 hour flight we arrived at Las Vegas airport…. I remembered that the first thing you see are the slot machines, and yes they were still there! After getting a little (if you can) used to the temperature (38 degrees celcius) it was time to go to the hotel. They had arranged some “taxi’s” for us, one of them you see below, that took us to our hotel – The Venetian! 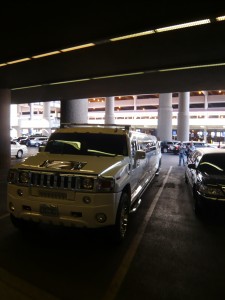 At night we had dinner in the Bellagio and after that we had an very exciting show from cirque du soleil (show named “O”). Very, very, very nice!
After the show (around 00:00) we got onto the strip, it was really crowded at that time. Traffic jams, loud music comming from everywhere, lots of people.

19 June 2011:
We were picked up by a bus that drove us to a little airport (called Papillon) an hour from Las Vegas near Boulder City. We took of with 4 helicopters flying near Lake Mead, the Hoover dam and eventually going into the Grand Canyon. It is really great to see all this from above. 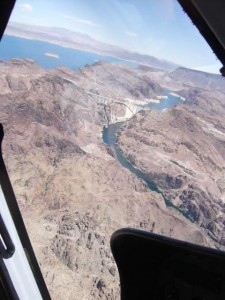 After flying through the Grand Canyon for some while we landed on a plateau a little bit above the colorado river and we had a nice lunch in the heat. We had some time to walk around and take some nice pictures it was time to fly back to Boulder City. 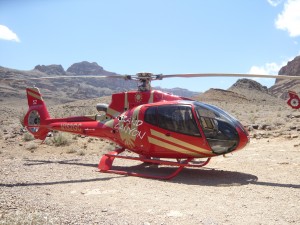 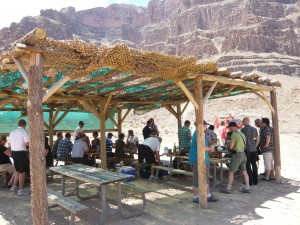 We then had the afternoon off in Las Vegas. After that we knew that although the strip doesn’t seem that long, it took us more than an hour to get back from the Luxor hotel/casino to the Venitian! Here are some shots. 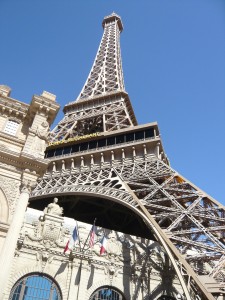 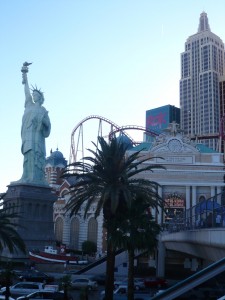 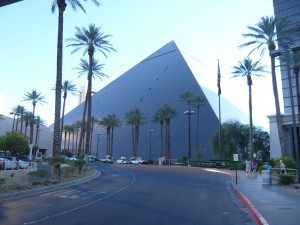 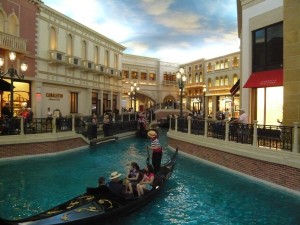 It was a nice afternoon in Vegas, except for the heat perhaps… But what a nice cold heineken beer can do! Had a nice italian dinner in the evening (our last one this trip) at a restaurant in the Venetian called “canaletto”.

After dinner we all agreed to have “some” drinks in the V-bar at the Venetian at midnight to cellebrate the great trip we had. In the time between we walked off to the Bellagio hotel to have a look at the fontains. I’ve to admit is wasn’t as spectacular as I remembered but still it was nice.

Our drinks at the V-bar was a nice end of the trip…. A lot of champaign, drinks, music and it was rather late before we went back to our rooms.

20 June 2011:
Even though we went to sleep at around 05:00 in the morning we woke up at 09:00 (really great to have a jetlag) so we had a breakfast and did a little shopping before we had to checkout of the hotel (bought some souvenirs for the kids).
We left the hotel in style, we got used to be driven around in a limousine at this time 🙂

We flew back (with a delay) to the Netherlands with Delta airlines and we had to change flight at minneapolis. We actually had to run to make it to our second flight, but we managed and had a quiet flight back home and arrived on time in Amsterdam. Even our luggage made it to Amsterdam!

I really would like to thank Oracle, and especially Yves van Looy, for this really great trip that was arranged  for us to San Francisco and Las Vegas. For all people that have the opportunity to participate on AYTS 2012, just go for it!
They offer interesting tracks to follow and the prices are very, very, very nice!